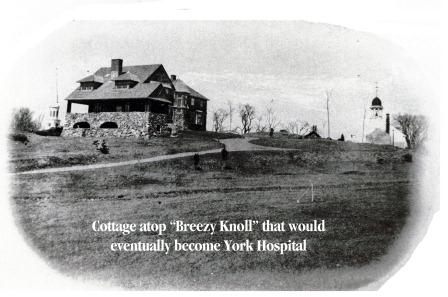 Starting out as a summer cottage built high upon “Breezy Knoll” in York Village in 1906, York Hospital has since grown to become one of the most respected, caring and sophisticated facilities in the Seacoast area. Early incorporators purchased the land atop “Breezy Knoll” where the hospital still stands today, for $15,000. In a converted cottage style home, York Hospital opened its doors on July 22, 1906. It was a 10-room hospital and among the first patient’s treated, there were diagnoses of Typhoid Fever, Epilepsy, Rheumatism and Delirium; with surgical cases including appendectomies, fracture care, carcinoma, endometriosis and hysterectomy. The first President of the Board was Seabury W. Allen, elected in 1904. The cottage remained as the hospital’s main building for care for 50 years before its then Board of Trustees, led by Roy Sturtevant embarked on a fundraising campaign to erect a new, modern facility to care for patients. A $400,000 “modern”, 2-story building was built on the hospital property (dubbed the ’58 Building) and opened April 12, 1959. This brand new, state-of-the-art hospital provided private, semi-private and 4-bed rooms (32 beds in total), along with 6 bassinets and 2 nurseries on the upper floor for inpatient care; and surgery, emergency, lab & x-ray, and supportive hospital services such as dietary, supplies, housekeeping, etc were housed on the lower level. 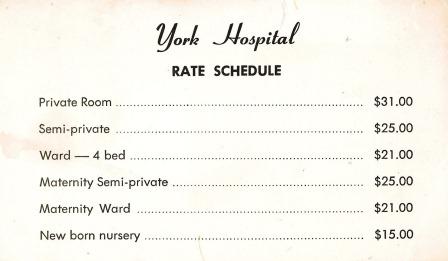 On September 8, 1959, the old cottage hospital was demolished. The ’58 building still stands today, though it has been added onto and modified several times to be the York Hospital we all know and love today. The original ’58 Building is the current Hancock Wing upper and lower floors of the hospital. In 1960, the hospital saw its occupancy rate increase from 66% to 85%, surgeries grew 130%, x-ray 80% and lab testing needs 125%. The hospital was quickly running out of room. In 1962, a 3-story addition to the hospital was completed on the south wing of the building (on the Barrell Mill Pond side of the building) that included space to increase the bed count to 41, added a solarium with exterior balcony, more offices, a nursing station, conference room, pharmacy, and additional space to expand medical records, the lab and central sterile supply. This addition currently houses Breast Care on the 2nd level, lab reception area on the main level, and IS equipment storage on the lower level. A 2-story north wing addition took place in 1965 to add space for the expanding laboratory, x-ray, a new outpatient waiting room and more office space. It went through additional renovations over time and currently houses the laboratory, CT Scan, and Cath Lab on the lower level and the Ellis Conference Room, Administration and Cardiovascular Care on the 2nd level. The next major addition happened in 1968 when Extended Care services were added. An entire new wing of the hospital was constructed and attached to the ’58 building via a corridor. The 40-bed Extended Care Wing – called the Henry Strater Wing was dedicated on May 25, 1969. Along with brand new patient rooms, the project added a new kitchen and dining room, beauty parlor, fireplace and the hospital’s first color television. Extended care services remained in the wing until 2008, when the skilled nursing service was transitioned to Durgin Pines Nursing Home in Kittery. The wing is currently home to inpatient rooms and Family Care (birthing and pediatrics). By the late 1970s, the hospital was providing services for 68 acute care beds and 18 skilled nursing beds in a space that was designed for a 46-bed hospital. The community was expanding and pressure to expand was felt again. The board and leadership looked at many alternatives but decided upon an idea to construct a new wing to solve the space issues in 1979. Regulatory issues and CON reviews delayed the project but the hospital pressed on. Its 4.4 million expansion, known as the Cameron Biewend Wing opened in June, 1983. It was built toward the northwest corner of the building, and provided the hospital with its new entrance on Lindsay Road. The expansion provided new space for many services to move into – including the emergency department (with ambulance entrance), new outpatient area, radiology, 5-bed special care unit, new lobby and admitting on the ground floor and new semi-private and private inpatient rooms on the second floor to replace the former 41-bed acute care wing in the ’58 building. The space in the ’58 building that was vacated was then renovated and turned into physical therapy, additional lab space, cardiology, medical records, medical library, office space and a solarium. Things remained quiet for a while as staff and patients became accustomed to the new space. But…something was brewing! By 1985, the surgical services at the hospital had grown well beyond its space. Now 30 years old, the center needed more space than the 2 operating rooms could handle, and plans for another addition emerged. In 1992, the Baldwin Family Surgery center opened in the basement of the new Biewend Wing(after having relocated supplies that were once housed there to a new location, and building a 4,000 sf addition). The new surgery center had its own entrance, an additional OR (bringing the total to 3) and provided for expanded surgical capabilities, special procedures and oncologic care. The hospital did not stop there. Many services and programs have been added. Most significant changes have occurred in the communities around us. The Heart Health Institute opened in Newington, NH in 1993 (and moved to York in 2002); York Hospital began bringing services closer to home by building service centers in the surrounding communities. The first, York Hospital in Wells, was built in 1999 and housed an Urgent Care center and several ancillary services and physician practices. The success of this site led to many others – including York Hospital in South Berwick in 2004; York Hospital in Berwick in 2007; Kittery services were added in 2008 but a brand new building was built, called York Hospital in Kittery in 2012. The last major renovation/addition to occur on the hospital’s main campus was an addition to the surgery center, which added 2 additional Operating Rooms, expanded the pre- & post-op space and provided a private recovery area was completed in two phases in 2010 and 2011.

Today, York Hospital includes the main hospital building – with all of its additions and changes – along with dozens of community sites and physician practices to care for all of your health care needs. We will continue to grow, as the health care world continues to evolve.